The first bout between Ward and Kovalev was close and very controversial in the eyes of a lot of boxing fans.

Ward pulled off a unanimous-decision victory over Kovalev last November, with scores of 114-113 across the board. Kovalev knocked down Ward in Round 2, but battled back just enough in the judges eyes to give Kovalev his first loss.

This bout is highly anticipated, probably even more so than the first fight. Ward vs. Kovalev 2 is a battle between two of the top pound-for-pound ranked fighters and will likely determine who deserves to be ranked No. 1.

It has been no secret that Kovalev was not happy with the decision in the first fight and was adamant about getting a rematch. This is guaranteed to be a great fight between two men looking to prove not only that they deserved the victory last November, but that they are the current best pound-for-pound fighter.

Read on for a complete preview and prediction of Andre Ward vs. Sergey Kovalev 2.

Table of the Tape 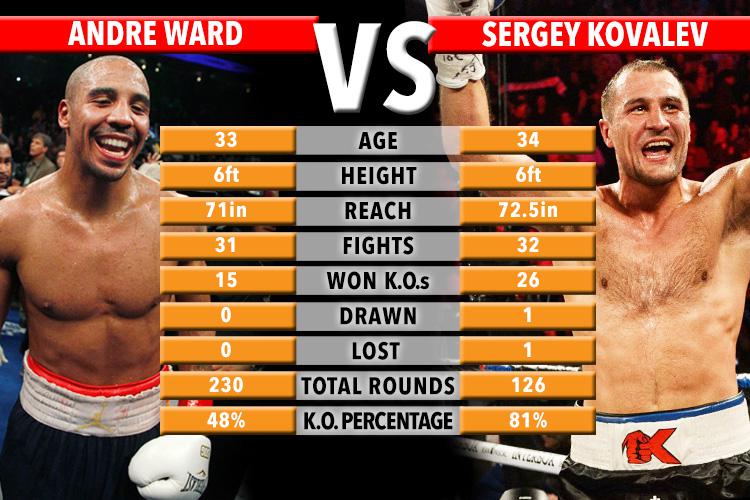 Andre Ward and Sergey Kovalev is a solid matchup, no matter how you look at. Their ring experience is fairly similar with nearly identical records–Kovalev’s single loss coming to Ward last November.

Physically, again they are very comparable. Kovalev has a slight reach advantage of an inch and a half, but both men stand at six feet tall. Both men are also orthodox fighters which should prevent tripping over each other and awkward exchanges.

With this being such a fair matchup, it’s going to come down to whoever has the better game plan and strongest will to win. Following the first fight, Sergey Kovalev was adamant about getting a rematch. And once the rematch was announced, Kovalev did not hold back his opinion of Andre Ward through social media and at press conferences.

Kovalev was relentless in his torment, making fun of his “Son of God” nickname, calling him “Son of Judges.” It was clear that Kovalev felt he was robbed in their first meeting and has not been shy in expressing so.

There have been rumors circulating since the rematch was announced from both Team Ward and Team Kovalev.

There were accusations that Kovalev’s trainer, John David Jackson, reached out to Ward’s team looking to switch sides in hopes of helping Ward. Jackson fervently denied these claims and said it was actually Ward’s team that reached out to him.

Kovalev has been passionate and vocal in response to these claims and what he feels are lies being told by Team Ward. He expressed that not only himself, but a lot of others feel the same way and have told him that they want him to shut Ward up once and for all.

“In my eyes I see that nobody wants to work with them. I don’t want to say who said it but a lot of people have been around me or meet me and say, ‘Finish him. Finish him,” said Kovalev.

With all of the rumors and accusations aside, it is clear that Kovalev is still very upset about the controversial decision in the first fight. Kovalev feels that he won and that he is going to win the second fight too.

He is very confident going into Saturday night’s fight. Kovalev explained that on several occasions he over trained for the first bout and also stated that Ward doesn’t have much punching power either.

“I wasn’t happy. Why did I do a lot of work for this guy? He is nothing. He did nothing to me. He had nothing,” stated Kovalev (via Boxing Scene). Andre Ward is one of the most adaptable fighters in the sport right now. This is a huge strength for Ward because he is able to recognize styles and adapt accordingly over the span of a couple rounds.

Ward is very physically strong in terms of having the ability to bully his opponents by clinching and overpowering them.

Ward has a smothering style which makes it difficult for his opponents to land cleanly.

Ward is a very intelligent fighter. He is undefeated for a reason and it can be largely credited to his textbook boxing approach.

Ward knows how to stay calm in the ring and prevent getting flustered by his opponents.

By staying level-headed, he is patient in his approach which prevents him from taking unnecessary punishment. With an 81 percent knockout ratio, it is clear that Sergey Kovalev’s devastating power largely contributes to his victories.

Along with having the knockout power, Kovalev is very precise when he throws punches, making the power even more damaging to his opponents.

Kovalev has the nickname “Krusher” for a reason.

Kovalev is a very good defensive fighter; he rarely receives much ring damage. Kovalev knows how to work the ring to avoid getting hung up on the ropes too much.

Another factor to Kovalev’s defense is the fact that he is often the aggressor, forcing his opponents to fight on their back foot so he doesn’t have to be on defense for a majority of the fight.

Kovalev’s jab is so strong and powerful. His jab allows him to control the pace of his fights.

In the last fight against Ward, Kovalev’s jab was a huge factor in the success he had.

The constant jabbing from Kovalev threw Ward off and he wasn’t able to find as good of a rhythm because of it. Though it’s hard to find weaknesses in both of these fighters, Andre Ward needs to avoid taking an unnecessary damage.

Ward has been dropped and was dropped in the first fight against Sergey Kovalev which has people questioning his chin.

Kovalev has knockout power and has made it pretty clear leading up to this fight that he wants to hurt Ward– Ward must protect his chin. Though Sergey Kovalev looked sharp in the first fight against Ward, his conditioning could be improved. If Kovalev would have been able to continue the pace he had set in the beginning rounds, it would have made a stronger case for him in the judge’s eyes.

Kovalev has been very emotional leading up to this fight which could be a disadvantage if he lets it get the best of him.

Boxing is just as much a head game as it is a physical sport, Kovalev needs to avoid letting his disappointment in losing the first fight and his dislike for Ward to cloud his game plan. This is a very difficult fight to call. There is a lot on the line for both fighters–Sergey Kovalev is looking to prove he was in fact robbed the first go ’round and that he deserves to be in that No. 1 spot on pound-for-pound lists, while Andre Ward wants to prove the naysayers wrong who believe he indeed lost in the first bout last November.

I expect Ward to look better in this second fight than he did in the first. I believe he is going to learn from the mistakes he made and come out stronger in the early rounds. Ward needs to start out strong to avoid playing catch-up again. Kovalev is going to have to use his jab again to keep Ward on his back foot.

By using his jab, Kovalev can avoid getting in a wrestling match with Ward. Kovalev has to keep the pace and energy high throughout the entirety of the fight if he wants to come out on top.

Though I think this is going to be a challenging fight for both men, I believe that Ward will come out victorious and remain the WBA, WBO and IBF Light Heavyweight champion.

Learning from the first fight, Ward is going to perfect the flaws in his game and exploit the weaknesses in Kovalev’s.

With that being said, I am still giving Kovalev a puncher’s chance–I would not be surprised if he knocked Ward out either.

Regardless of what happens, this is going to be an exciting fight and once in for all, we will know who truly deserves to be at the top of the Light Heavyweight division.

Boxing fans are in for a treat.