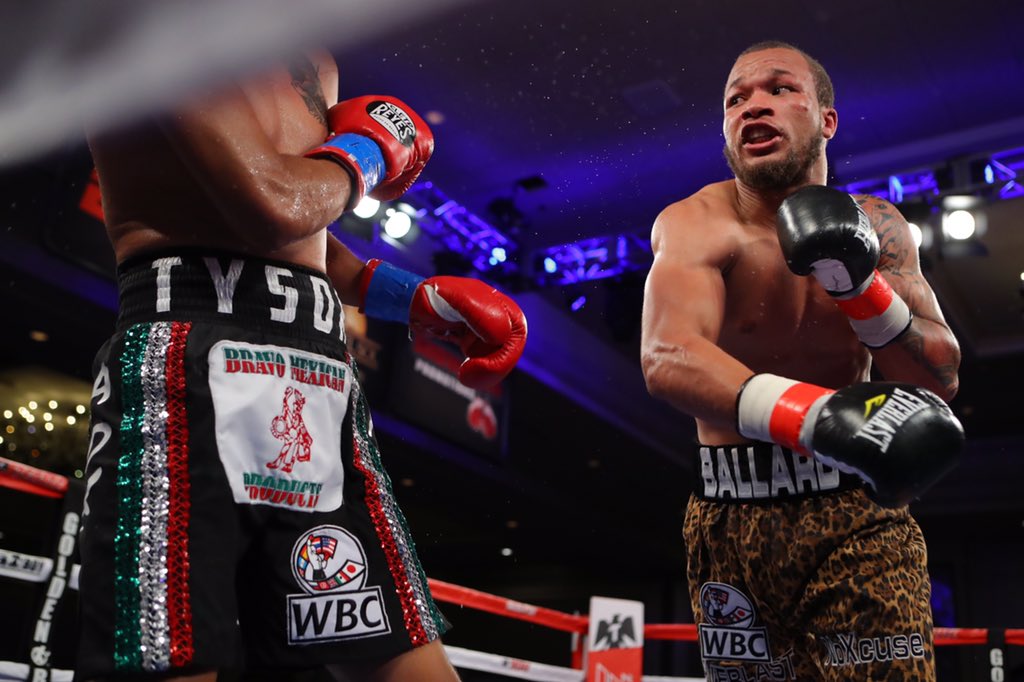 The fight kicked off the televised portion of a Golden Boy Promotions on ESPN fight card from Casino Del Sol in Tucson, Arizona.

Ballard entered the bout riding a five-knockout streak, and although his opponent was replacing two other fighters, he was well prepared after training for weeks with gold medal Olympian, Ryota Murata.

The fight started off with both men feeling each other out in Round 1, probing with jabs to the head and body.

While Luna was able to back Ballard to ropes with combinations upstairs, Ballard had success countering with his right hook.

In Round 2, Ballard found himself on the ropes more often, but it was to Luna’s detriment as Big Meech landed a hard left hook off the ropes, which dropped Luna flat on his back.

#BigMeech showing off some power as he drops Adrian Luna in Round 2. #Boxing #GBPonESPN pic.twitter.com/EVfuDrcMko

Luna got up on wobbly legs, and although there was a minute left in the round, the tough Mexican was able to hang on and survive the bell.

After surviving the knockdown, Luna proved that it would take much more to stop him from coming forward for the duration of the fight.

In Round 4, Luna caught Ballard flush with a hook upstairs and backed him up as the round came to a close.

Both fighters had their moments in the middle rounds, but Ballard’s combinations and movement gave him the slight edge.

Ballard, who down the stretch was visibly gassed–no doubt a product of Luna’s work downstairs–was forced to hold on in Round 9 as Luna poured on a barrage of power punches.

Even though he out-jabbed his opponent–38 to 19–Ballard could have made things easier for himself by jabbing more consistently. Regardless, he showed tremendous grit and toughness by continuing to fight in the trenches and give as good as he was getting.

With the fight seemingly hanging in the balance, both men came out determined and traded power shots in the 10th and final round.

Ballard scored the more telling blows in the 10th and as the fight went to the scorecards, he seemed to have done just enough to take the win.

Two of the judges saw the same close fight that most spectators did–scoring it 95-94 for Ballard–with the third judge scoring the bout 97-92.