Floyd “Money” Mayweather (50-0, 27 KOs) is often described as the best Welterweight ever, the only one to go 50 fights without a loss thus far. With his defensive prowess unmatched, he has not only defeated everyone he has faced, but he has made it look easy while doing it.

As of the last two years however, Mayweather has begun to fight for money, completely abandoning his legacy.

Beginning in mid 2017, Mayweather fought his first match in the 21st century against an unranked opponent in Conor “Notorious” McGregor (0-1).

Though the fight was a massive money draw, it began to take away from Mayweather’s legacy. Then it got worse.

A month ago, Floyd Mayweather was reported to agree to a fight with unknown Japanese kickboxer Tenshin Nasukawa. This caused an uproar in the boxing community, with many claiming he is solely making cash grabs against less than worthy opponents and that he would not last moments against the champions of today.

We’ve heard this argument before as well, or at least a version of it. Mayweather haters have been saying since his prime that there is no way he’d remain undefeated were he to fight in the golden age of Welterweights–the days of Tommy Hearns, Roberto Duran and Ray Leonard.

Analyzing the style, talent and experience of the greats of the 80s, let’s look into that exact question.

How would Floyd Mayweather truly fare against the best fighters of the 1980s? 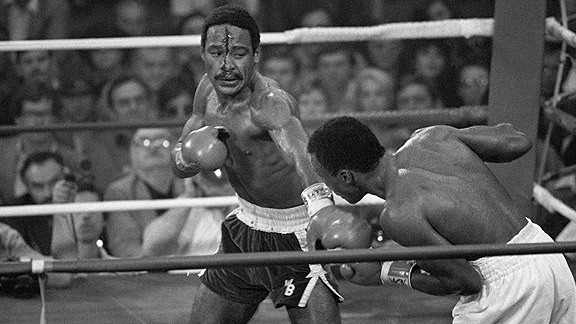 Wilfred “El Radar” Benitez (53-8-1, 31 KOs) is one of the most underrated fighters of all time. An incredible talent known primarily for his war with Sugar Ray Leonard for Sugar Ray’s first title fight, Benitez was tragically erased from history due to being surrounded by so many other greats.

In the ring, Benitez was an evasive counterpuncher who responded to punches with stinging shots to the head and the body. That being said, Benitez did not have noticeable knockout power, rather he just wore his opponents down with timing and volume.

Were he and Mayweather to hop into the ring together, it would be a defensive masterclass. The fight would open slow, as the two fighters used their snapping jabs to figure each other out.

When it comes down to it however, Benitez lacks the offense required to give him the edge over Mayweather. He often attacks from straight on and keeps his lead hand down, two traits that Mayweather would be able to abuse with ease.

By the end of the fight, I would expect to see Benitez becoming increasingly frustrated as he was unable to answer Mayweather’s defense and he would make more mistakes, just increasing the deficit. Mayweather would win the fight by a wide UD. Roberto “Manos de Piedra” Duran (103-16, 70 KOs) earned his nickname “Hands of Stone.” Duran was a hard hitting fighter who closed distance like no other of his time and looked to punish any man who dare step in the ring against him.

Duran was a master at getting into his opponents head and forcing them to fight his fight, a tactic that worked most famously in his first bout against Sugar Ray Leonard.

When it came down to it however, his biggest flaw was shown when his trash talking did not work. In the second bout against Ray Leonard, Duran was exposed, showing that he was unable to deal with high-caliber boxers as opposed to brawlers.

Floyd Mayweather is one of the best in the game at trash talking, and if he could withstand the talk of Conor McGregor, there is no way Duran would get in his head.

I do not think that Mayweather would do damage to Duran like Leonard did, as he lacks the offensive tendencies and power, but he would dominate Duran throughout the fight, frustrating the Panamanian as he cruised to a unanimous decision victory. Thomas “Hitman” Hearns (61-5-1, 49 KO) was one of the greatest all-around fighters of the 1980s. Standing at a staggering 6’1″ with a 78″ reach, Hearns’ piston-like jab set up his opponents for his devastating right hand.

As incredible as a puncher that Hearns was, he was also a phenomenal boxer. He outboxed the best fighter of the era in Sugar Ray Leonard both times they met in the ring.

If the two met in the ring, Hearns’ high-pressure style and superb boxing ability, accompanied with his length and stunning power, would prove to be too much for Mayweather. Though it could be a close decision, I believe that Hearns would be the only fighter on this list to knock out Floyd Mayweather.

Hearns would waste no time in jumping on Mayweather and, though Mayweather would be able to defend in the beginning, he would have to acknowledge the height difference and abandon the defense a bit to get inside that piston jab, and that is where Hearns would thrive.

Hearns would eventually rock Mayweather and take him to a place he has not been to before. Smelling the blood in the water, Hearns would step it up and begin letting his hands go at will, forcing the referee to call the fight. Sugar Ray Leonard (36-3-1, 25 KO) is the biggest name out of the four listed in this article, as well as the only man to defeat all three of the others.

With his slick defense, his quick and stinging offense, and his abounding confidence in the ring, Sugar Ray drew eyes to the Welterweight division like nobody else. When it comes down to it, Leonard is not that different of a fighter than Mayweather.

When it comes to the two men fighting, it would be an interesting bout. Though Leonard was a phenomenal defender, he loved to fight on the inside, fighting off endless and merciless combinations.

Mayweather’s defensive prowess would greatly frustrate Leonard in the first few rounds, as Money took short counterpunches at will. Leonard would eventually adapt however, and forcing his way inside, throwing off his trademarked combinations, would start to shift the momentum of the fight.

Sugar Ray would be able to drop Mayweather deep in the fight, but this would force Mayweather to retreat back to his defensive mindset as Leonard finished the fight.

Leonard would win the bout by a close, but comfortable decision.